Grading Every Major League Team's Work at the Deadline

Braves: A-. Stole Michael Bourn from Houston for a hodgepodge of nothing.

Phillies: A-. After acquiring Hunter Pence from their minor league affiliate, err, the Astros, Philly has re-established themselves as the favorites to win the pennant.

Mets: B+. Got a great return for Carlos Beltran (Zack Wheeler) and dealt KRod, ridding themselves of the possibility of having to pay him $17m+ next year. Could have traded more players (Izzy, Hairston, Byrdak) for the future.

Nationals: B. Ridded themselves of Jason Marquis. That's enough for me.

Marlins: C. They acquired Mike Cameron for very little but did nothing else.

Cardinals: B-. If I were a St. Louis fan, I would be angry at dealing Colby Rasmus, but at least they got talent in return.

Reds: C-. By doing nothing, they have waived the white flag on the season.

Astros: D. What exactly is the plan here?

Cubs: F. They clearly are not winning anything this year yet decided not to trade any of their short-term assets (Carlos Pena and Kerry Wood to name two).

Rockies: A-. Received a great haul (as they should have) for Ubaldo Jimenez.

D'backs: B+. Got bullpen help (Brad Zeigler) which is what they needed. No complaints here.

Giants: B. Any time you can acquire your number three hitter for a prospect in High-A, you can't argue.

Padres: C. Why not deal Heath Bell for a prospect?

Blue Jays: A. Traded a bunch of relievers for their center fielder of the future, Colby Rasmus. Nicely done.

Orioles: B. Received prospect for some veterans. Wise thing to do when you are out of contention.

Red Sox: B-. They didn't need much, but the gamble on Erik Bedard seems like a good one at the moment since it cost them only a fringe prospect.

Rays & Yankees: F. They did absolutely nothing. Very confusing.

Indians: B+. I applaud them for acquiring Ubaldo Jimenez, the best player dealt at this year's deadline. He's under team control for another three years. Yes, it cost them two very good prospects but Jimenez is a sure thing. Something to smile about in one of the most depressed sports cities in America. Grade would probably be higher if they didn't waste their time acquiring Kosuke Fukodome. 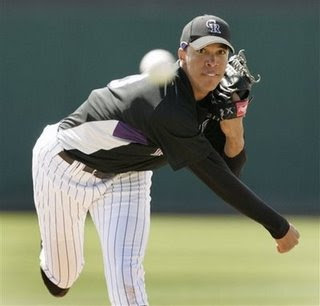 The prize of Trade Deadline 2011

White Sox: D. they did not make themselves better this year (traded Edwin Jackson) or next. I guess they saved a little cash though.

Royals & Twins: F. Both teams sat on their hands.

Rangers: A-. Turned one of the game' shakiest bullpen into one of the best with Koji Uehara and Mike Adams.

Mariners: B-. Got some nice value for Bedard, Pauley, and Fister.

A's: C+. Decent job turning a reliever into a potential first basman of the future (Brandon Allen), but when does Billy Beane's seat officially become "hot"? Before or after the release of "Moneyball"?

Angels: F. Snoozefest.
Posted by MSpiciarich at 10:05 PM No comments: 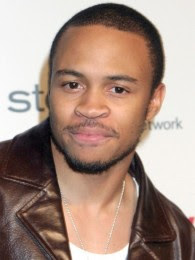 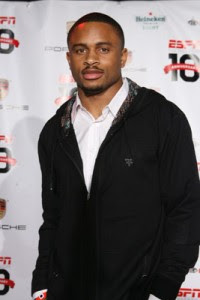 Actor Eugene Byrd and NFL cornerback Nnamdi Asomugha
Posted by MSpiciarich at 5:34 AM No comments:

A month ago, I called for the Mets to trade Jose Reyes. I still think that's the quickest and easiest way for them to compete in 2013. However, in the last few weeks, the baseball landscape - especially as it relates to the Mets - has changed.

-The Mets dealt K-Rod to the Brewers, ridding themselves of the possibility of having to pay him $17m+ for his services next year.

-The league seems keen on acquiring talent from the Mets, with Carlos Beltran leading the way.

- I could be completely off on this, but from an onlooker’s perspective, both Reyes and the Mets seem willing to work out a long-term deal.

That being said, here are the moves (in order) that Sandy Alderson and the Flushing brass should execute in order to put a competitive squad on the field in 2013:

1- Trade Carlos Beltran to the Giants for SP Zach Wheeler.

In my mind, Wheeler is the best prospect currently being discussed in trade talks for Beltran. He projects to be a solid number three starter. 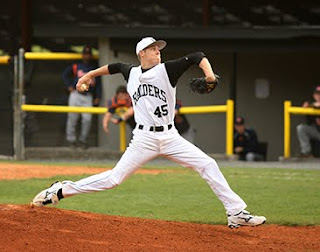 Wheeler was the fifth pick in the 2009 MLB Draft

Carl Crawford’s defensive talents are being wasted in left field of Fenway Park. He could easily shift to right field (yes, easily) while Bay could be hidden in left.

Bay has had previous success in Beantown, and it would stand to reason that the Red Sox would take a shot on him again since he’s only a year plus removed from being a top tier talent.

Lackey might find success in the friendly confines of Citi Field, and Ranaudo projects as a mid-rotation starter with local ties (he’s from New Jersey).

3- Trade David Wright to the Angels for OF Mike Trout.

This will likely be the most hotly debated move in this post despite it being the least likely to actually happen. I could (and might) write an entire post on why this trade makes sense from both sides, but here is a brief overview:

The Angels have been shut out an American League-leading 11 times this season. If they have any hopes of competing this season, they need to acquire an impact bat.

The Mets could take back a dead salary or two (Fernando Rodney?) to make this more appealing dollar-wise.

Trout is also from New Jersey and I love creating deals that send at least one player into his old backyard. (For what it’s worth, Wright is from Virginia.)

4- Trade Scott Hairston, Tim Byrdak, and Taylor Bucholz to the Phillies for OF Jon Singleton.

These three guys are not in the Mets’ post-2011 plans. Getting a right fielder of the future is worth helping an enemy in the short term.

5- Trade Pedro Beato and Jason Isringhausen to the Diamondbacks for 3B Matt Davidson.

A strong bullpen is a luxury for a non-contender team but a necessity for a one with playoff aspirations. Davidson could form a nice offense-only 3B platoon with Daniel Murphy.

[These deals leave the Mets with Willie Harris, Mike Pelfrey, and RA Dickey as trade bait. Could they use these pieces to upgrade at catcher? I would love to see Yasmani Grandal in a Met uniform but doubt this would be enough to get him.]

Just get it done.

Phillips has been the first free agent in my recollection that has spoken good things about playing in Citi Field. He would sure up a position that has been a black hole since the days of Edgardo Alfonzo. He's also a good dude.

Without too big of an imagination stretch, this team could compete for the NL East in two years while maintaining a reasonable payroll.

Posted by MSpiciarich at 11:58 PM No comments:

Aaron Heilman will be released.

Posted by MSpiciarich at 6:27 AM No comments: