*How many base cloggers (getting angrier...) can we fit into a lineup? First Bay, now word that the Molina deal is imminent (seething....).

$22m per year can buy you a whole lot of starting pitching...which is what the Mets reallllly need.

Goodness. Send help. And by help I mean a new GM.

*Can the voters just add Blyleven to the Hall so we don't have to be bombarded with propaganda? Everywhere I look, it seems a new Pro-Bert article has just been written. He's a fringe HOF'er which is why it has taken 13 tries. It is certainly not an open-and-shut case. At this point, it seems like a pity vote anyway. I am in no way trying to belittle the HOF, but this is getting crazy. Enough.

*I tuned in for baseball analysis, not ... show ... tunes. Am I missing something?

Maybe, the Mets just have me frustrated... (And, yes, I am trying to break my own ellipsis...or is it ellipses... record for one blog. Success.)
Posted by MSpiciarich at 7:04 PM No comments: 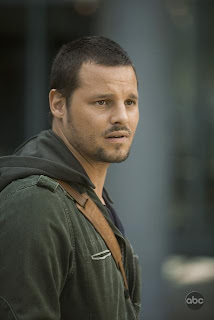 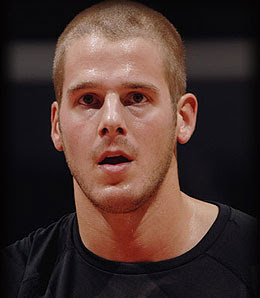 Karev from Grey's Anatomy and Portland Trailblazers' center Joel Pryzbilla (I will now punch myself in the face for referencing GA)
Posted by MSpiciarich at 6:09 AM No comments:

I'll take that.
Posted by MSpiciarich at 7:07 AM No comments:

As pathetic as the New Jersey Nets have been this season, there is hope.

That team can compete. In fact, that team would be BETTER than this year's Cavs squad.
Posted by MSpiciarich at 10:01 AM No comments:

I am not a runner.

I have never pretended to be a runner. In fact, runners annoy me as much as outspoken wine aficionados (if we want your opinions, we'll ask).

Yet, foolishly, I decided to try to run the NYC Marathon.

My thinking was:
1- it would make for a great story.
2- I have no idea how long I will live in NYC.
3- I am not getting any younger.

So, I applied to the lottery . . . and got rejected on March 31st of this year. A few months later, a friend's (loyal reader RMac) girlfriend notified me that there was an opening in the race that she could claim for me. I agreed.

That gave me 115 days to prepare for the 26.2-mile jaunt. Now, mind you, I had never run more than three miles at once in my life. Ever.

My goal (successful completion) was not anything in the realm of "heroic," but it would be a challenge.

My training regiment consisted of three 5-7 mile runs during the week and a longer run each Saturday followed by rec league football games on Sundays. (Personally, I think the football was a huge help as it satisfied my sprint workout requirements.) I had great training partners (loyal readers CGleas, Bitman, and my fiancee) making the runs a bit less boring. Running around a track is brutal, but running around the greatest city in the world, even if it happens at the asscrack of dawn or before, can be relaxing, even therapeutic.

My longest pre-race run came on October 17th when I went for 19 miles. Once I knew I could handle that distance, I hoped adrenaline and the crowd would carry me the rest of the way.

Fast forward to November 1st, race morning. I'm sitting on Staten Island waiting anxiously for the race to begin. At 9:14, the gun to start the women's race sound, 45 minutes before I'm released. Time passes quickly, and I'm off.

The excitement and energy were palpable.

As we ran, the congregations of at least three predominantly African American churches burst into song and dance which was awesome. Seeing 50 people clapping and belting out song inspires you greatly. It may not sound like much, but just trust me.

My parents met me three times along the course, my fiancee twice. Again, this was hugely important as running for four plus hours is draining mentally as much as it is physically.

The weather was ideal - mid-50s - for November and the crowd was abuzz for all 4 hours and 24 minutes of my run.

People have asked me two questions: "what was the best part" and "will you do it again." To answer the first, I say the last half-mile where the crowd stood about seven-deep as we approached the finish.

Overall, the experience can best be described as the most fun I never wish to have again (that answers the second).

It's been five weeks, my IT bands still haven't recovered. If you don't know what those are (and I did not), go ask a runner.
Posted by MSpiciarich at 7:44 AM No comments:

*Game, set, match. Thanks for playing, Florida, and for all the great memories, Tebow.

*Bama, we'll see you in the BCS Title game 22 weeks from now. Your opponent, I hope it's TCU. For that to happen, we'll have to root for the Huskers.

*How can anyone still be opposed to a playoff? The Banter has your solution right here.
Posted by MSpiciarich at 7:02 PM No comments:

*I just read Urban Meyer's lips. He just asked one of his assistants if "the Notre Dame job was still available." (Bama leads 32-12)

*Enough with these reviews already.

*Makes no sense to go for two after this score. Sure enough, Bama missed.

*For my money, Mark Ingram takes the lead in the Heisman race. Colt McCoy can answer tonight.
Posted by MSpiciarich at 6:57 PM No comments:

*Florida needs a turnover now or this game is done. (Bama leads 26-13)

*For those wondering, John 16:33 reads, "I have told you these things, so that in me you may have peace. In this world you will have trouble. But take heart! I have overcome the world." Ok, then.

*At least it's better than Pitt QB Bill Stull's eyeblack today which read "Mom" under one eye and "Dad" under the other. I love my parents too, but come on.

*I'm fairly certain Verne Lunquist is drunk. Either that, or he's watching another game.

*Was that Emmitt Smith giving advice to Tim Tebow? That would drive me crazy if I were Urban Meyer.

*Both teams hit HARD.
Posted by MSpiciarich at 6:39 PM No comments:

A Few Thoughts and Links

*We have a new frontrunner for Dumbest Move of the Year.

*Florida DE Carlos Dunlap, village idiot. Five days before the biggest game of the year, this potential Top-5 pick not only decides to get drunk but then he decides to drive? Florida and (pushover) head coach Urban Meyer wisely suspended him from the Alabama game for being an idiot.

*You are better than this, Tiger.

Posted by MSpiciarich at 7:29 AM No comments:

Tom Dierkes of MLBTR.com predicts whether or not the 70 eligible players will be offered arbitration by their current teams. Here are his picks (along with my disagreements).