I hate when people complain but don't offer an alternative; so, allow me to proactively map out a plan for Sandy Alderson to follow the rest of the offseason because I think he's done a terrible job thus far this winter.

I’ve made similar attempts in the past - see here and here and here- although there’s no proof that Sandy read anything more than the first suggestion in 2011.

Allow me to vent for a minute.

It makes no sense that the Mets wouldn't be in on Doug Fister, Dexter Fowler, or even Michael Choice. Admittedly, not every team is going to give Sandy the opportunity to match or even better an offer that they have on the table.  However, it's his job to find out which players are available in the first place.

It makes even less sense to sign Chris Young to a one-year, $7m+ deal. There’s very little upside as this deal seems to be an overpay and there’s no team option attached to it (to my knowledge). If he performs, he’ll leave. If not, he’ll be overpaid. I would not have made this move, instead leaving Juan Lagares to patrol centerfield for 8% of the cost.

I understand Sandy is likely under some type of payroll limitations, and just based on what I’m reading, I used a $95m budget.

[Side note: the Wilpons should consider selling this team if that’s all they can afford to spend. They are in the largest market in the country (world?) and get outspent by half the league. What a joke.]

Here are the moves I’d make:

1-TRAID Ike Davis, Brandon Nimmo, and Gavin Cecchini for Ryan Braun. Ryan Braun is owed over $100m over the next six seasons ($11m in 2014, $13m in 2015, $20m a season from 2016-19), a luxury Milwaukee cannot afford especially after embarrassing both himself and the team with his horrendous handling of the PED suspension. The Brewers are likely not going to compete for a playoff spot in the next few years. They have arguably one of the three worst farm systems in baseball. They surrendered their 2013 first rounder in exchange for signing Kyle Lohse. This deal infuses the system with two former first rounders and rids them of the financial obligation of paying Braun; plus, Davis addresses a huge hole at first base. Is this trade crazy? It might be but it at least has to be in the realm of possibility. This deal alone turns the offseason into a major win. 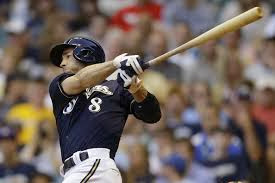 2-Sign Curtis Granderson to a 3 year, $45m deal. The Mets had one of the most boring, frustrating offenses in baseball last season. Add Granderson to lineup that features David Wright and Braun, and bam! Excitement. And power. I’ll get to the lineup in a bit, but a 2-3-4 of Wright, Braun, and Granderson would be a joy to watch.

3-Sign Corey Hart to a 2 year, $16m deal. With Ike gone, we need a first baseman. I considered a platoon of Josh Satin and Lucas Duda for a minute but then again remembered I was talking about Lucas Duda and Josh Satin and changed course. In all seriousness, I wouldn’t hate that platoon because Satin rakes against lefties, and Duda rips righties, but I think Hart’s on-base skills would better complete this lineup. Satin goes back to the minors while Duda becomes a bat off the bench and spot starter against righties.

4-Sign Andrew Bailey to a 1 year, $2m deal with team option for a second year. Bailey was non-tendered by the Red Sox, but he’s had success in the past and he’s a local kid. It’s a low-risk deal with high upside. If he shows he’s healthy but the Mets struggle, he can be dealt before the deadline. No brainer.

5-TRAID for Arizona SS Chris Owings. I fell in love with Owings at this year’s Futures Game. He’s a complete player, and although his numbers were likely inflated by some friendly home parks the last few seasons in the minors, he’s a huge upgrade from Ruben Tejada. The D-backs have a plethora of shortstops. Would a deal of Michael Fulmer and Cesar Puello get the job done? Again, you need to ask the question to find out.

6-TRAID Daniel Murphy for Tim Collins. The Royals have a gaping hole at second base, a desire to get some value for the about-to-become-more-expansive-than-a-mid-market-team-would-like-middle-reliever, and their GM is one of the worst in baseball. Everyone else takes advantage of Dayton Moore. Why can’t the Mets? In a dream scenario, I would add a couple prospects to this deal and target Kyle Zimmer (my pitching man-crush) but even Moore can’t be fooled into that kind of deal. Murphy was actually a top-10 second baseman offensively last season and can swing the stick. He’s just too expensive for the Mets (cheap Wilpons) who would be better served spending money elsewhere. Collins will cost about a million bucks this year, his first in arbitration and although diminutive in stature can be effective and give Terry Collins another lefty in the pen.

By my math, that would leave Sandy with about $8.5m more to spend as he sees fit (assuming $95m payroll).

Maybe he can give Daniel Hudson a call to see what it would take to get him under contract with an incentive-laden deal in the hopes he can contribute on 2015 and beyond.

Maybe he can frontload Granderson’s deal to a) incentivize him to sign, and b) offer some relief in the last year of the deal to offset Braun’s salary bump.

Maybe he can trade for Chase Headley in the offseason and use the money to sign him long-term. I love the idea of trading for Headley right now as his value is about as low as it could be, but with Chris Young playing left field and Wright at third, there’s not much room for him. An alternative would be not signing Hart and letting Headley play first.

Maybe he can make a deal for Asdrubal Cabrera to play second base, and sign him long-term.

For those that have asked if I think signing Robinson Cano to a monster deal would be worth it: I don’t think it is….assuming the payroll limitations, that is. If the Wilpons bump the budget up by $25m, of course, I would be in favor of signing Cano. And I will continue to beat this horse, but a payroll of $120m would have been the 10th highest in baseball last year so it’s not a ridiculous thought that the budget could be increased to that number.

These moves would leave the Mets with this potential lineup:

That is a top 10 offense, and the idea of adding Cano in place of the EY / Flores combo has me downright giddy.

Mix in a token backup catcher like Anthony Recker, Duda, and Lagares and you have your bench.

Unbelievably, it’s taken me until here to even mention Matt Harvey’s name. His injury was the biggest groin kick we’ve received as Mets fans since Carlos Beltran was frozen by Adam Wainwright to end the 2006 NLCS. It was devastating. However, I have every reason to believe the Mets can still compete in 2014 for a playoff spot and seriously contend for the World Series in 2015 when Harvey’s back.

The rotation this year could be:

Yes, I am a proponent of calling up Syndergaard and Montero and letting them learn under pressure.

When Harvey’s back in 2015, he jumps to the top of the rotation and everyone gets bumped a peg.

Tell me where you would improve my plan or why I’m being crazy.

Also, these are the salary assumptions I am making:

Posted by MSpiciarich at 9:05 PM No comments: