-Matthew Carruth studies things like this so we don't have to. [Fangraphs]

-Pat Andriola quantifies how much Chone Figgins has sucked this year. [Fangraphs]

-Mike Fast of HBT puts together a nice pitching primer.

-Stewart Mandel predicts how the first-year coaches will do in college football. My initial thoughts: too bullish on Notre Dame and too bearish on Kansas. [SI.com]

-We mentioned the Rays as a good fit last week for Brad Hawpe. Now, it's a reality. [Twitter / Ken Rosenthal]

-A crushing blow to the Nationals and their fans. Both of them. [Yahoo! Sports]

-More Jets stuff. David Harris, drafted a round later than Darrelle Revis has no problem producing and honoring his contract knowing the team will take care of him later. [Newsday]

-More basketball sabermetrics. If these sabermaticians (or is it sabermatricians?) want us to buy into their numbers, mathematically proving it's not a good idea to call a timeout - and prolong a game - seems like a great start. [HSAC]

-A sick alley-oop to get you ready for the weekend:

Baseball Study: Can a few terrible starts conceal a gem?

I'm no mathematician, but I would love it if someone out there shares my curiosity for baseball and can (dis)prove some of my theories.

Basically, I would be the idea (people) person; you will be the brains.


Thesis #1: If we remove a starting pitcher's worst two starts (as defined by lowest Game Score), we may uncover a few hidden gems - pitchers that perform very well most times out but have their stats - sabermetric or otherwise - crushed by these terrible performances. [Quality Start % does something similar, but I think this could yield results that give us more insight; if it helps, make up a fancy moniker like xQS%.]

ESPN* attempts to quantify each player's contribution to a particular game by assigning a Game Score. For pitchers, the formula for reads:

The average Game Score this season for starting pitchers is approximately 50.8.

Takeaways: If not for a couple brutal starts, Tommy Hanson would be getting talked about like an ace. Padres pitchers have been incredibly consistent.


General takeaway: I've been sitting on this data for over a week and wanted to get something out before it got too stale, but as I thought more about it, I realize I should have removed each pitcher's worst two games and compared those numbers against the rest of the pitchers without two starts removed.


Other things I came across during the study which I found interesting:

-King Felix leads MLB by a wide margin with a QS% sit around 89%. Great pitchers sit around 80%.
-One more chart you might find interesting:
*ESPN may not have invented this stat, but this is the only place I have seen it.

For anyone interested, I would be happy to provide any of the source data. Just email me - thesportsbanter@gmail.com. Special thanks to David Pinto (BaseballMusings.com) for providing the Game Scores.
Posted by MSpiciarich at 8:58 AM No comments:

-I would probably agree with this headline despite the fact is was written by someone presumably in New Orleans. [Nola.com]

My three strongest points of contention:
1- No Peyton (puts this whole list into question)
2- MJD should rank higher (maybe top 3)
3- Ryan Mathews being on this list (he has never played a down in the NFL).

-Can one or more these guys be bargains in 2011? My guess would be Adam Laroche provides the most value. [The Baseball Analysts] 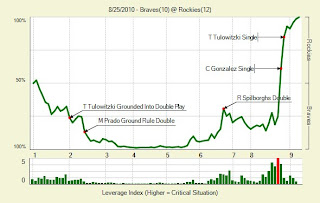 -Should the Pirates spend money to win games? [Slate.com]

-Of the ideas listed, I like #5 best, but I'm not sure any improvements/changes to the current waiver claiming process are in short order for MLB. [Walk like a Sabr]

-NBA Sabermetrics: to foul or not to foul when up three. [HSAC]

-Buster Olney blog. [ESPN Insider; password required]
-ESPN steals an idea from Peter King and runs it before his annual article: ranking the 200 best NFL players. [ESPN Insider; password required]
-Great article by Jeff Passan...unless you live in Florida. [Yahoo]
-Chaminade guy signs with old college coach (yes, Mike asked me to link to this story). [NFP]
-Q&A with Football Outsiders' Bill Barnwell. [NY Times]
-We knocked him yesterday so it's only fair to congratulate Jevan Snead today. [Bucs.com]
-(Non-sports) Are these miners collecting overtime? [Fox]
BC 8/25/2010
Posted by MSpiciarich at 9:36 AM No comments:

The summer has given us an opportunity to further assess the 2010 Draft class. Here are my grades:
MILWAUKEE BUCKS
Round 1: Larry Sanders (15)
Round 2: Darington Hobson (37), Jerome Jordan (44), Keith Gallon (47)
Grade: A. Love the potential upside with Sanders, Hobson can contribute off the bench, and Gallon is a skilled big man.
TORONTO RAPTORS
Round 1: Ed Davis (13)
Round 2: Solomon Alabi (50)
Grade: A-. Love this draft. Replacing Bosh will be impossible, but Davis could have been a top-5 pick. Alabi could have been a first rounder too. Great values.
OKLAHOMA CITY THUNDER
Round 1: Cole Aldrich (11)
Round 2: Tibor Pleiss (31), Latavious Williams (48), Ryan Reid (57)
Grade: A-. Aldrich is a bit of a stiff, but he'll protect the rim which is something the Thunder needed badly last season.
BOSTON CELTICS
Round 1: Avery Bradley (19)
Round 2: Luke Harangody (52)
Grade: A-. Grabbing a defensive stopper like Bradley with the 19th pick was a coup. Pairing him Rondo late in games will be a great weapon.
LOS ANGELES LAKERS
Round 1: None
Round 2: Devin Ebanks (43), Derrick Caracter (58)
Grade: A-. Grabbing two rotation players this late in the draft is a job well done.
NEW ORLEANS HORNETS
Round 1: Craig Brackins (21), Quincy Pondexter (26)
Round 2: None
Grade: B+. I might be in the minority, but I like both of these guys. Brackins can score and Pondexter is a great athlete that can run the wing for CP3.
PHILADELPHIA 76ERS
Round 1: Evan Turner (2)
Round 2: None
Grade: B+. With the second pick, the 76ers got the second best player. What else could you ask for?
CHICAGO BULLS
Round 1: None
Round 2: None
Grade: B+. They used the #17 overall pick to unload Kirk Hinrich's salary which allowed them to sign Carlos Boozer. Nice move.
WASHINGTON WIZARDS
Round 1: John Wall (1), Kevin Seraphin (17), Trevor Booker (23)
Round 2: Hamady N'diaye (56)
Grade: B. With the first pick, the team got the best player. After that though, more questions than answers. I do like Booker too.
NEW JERSEY NETS
Round 1: Derrick Favors (3), Damion James (24)
Round 2: None
Grade: B. I would have preferred Cousins over Favors, but I think the James pick is an underrated addition.
LOS ANGELES CLIPPERS
Round 1: Al-Farouq Aminu (8), Eric Bledsoe (18)
Round 2: Willie Warren (54)
Grade: B. Aminu's a tweener, but I like the risks they took on Bledsoe and Warren especially when we hear Baron Davis has ballooned to 260 lbs.
PORTLAND TRAIL BLAZERS
Round 1: Luke Babbitt (16), Elliot Williams (22)
Round 2: Armon Johnson (34)
Grade: B. Blazers got more talent, but it seems like they have way too many players and not enough minutes.
SAN ANTONIO SPURS
Round 1: James Anderson (20)
Round 2: Ryan Richards (49)
Grade: B. Classic San Antonio. With the 20th pick, they get a contributor for the 2010-11 squad.
ATLANTA HAWKS
Round 1: Jordan Crawford (27)
Round 2: Pape Sy (53)
Grade: B-. Not sure how much they improved their team this year since Jordan Crawford seems to be a younger version of Jamal Crawford.
DALLAS MAVERICKS
Round 1: Dominique Jones (25)
Round 2: None
Grade: B-. I like Jones as a player but don't the Mavs have plenty of these types?
HOUSTON ROCKETS
Round 1: Patrick Patterson (14)
Round 2: None
Grade: B-. Solid player. Fits the system. Ho hum.
UTAH JAZZ
Round 1: Gordon Hayward (9)
Round 2: Jeremy Evans (55)
Grade: C+. White dude that strokes the 3. Good fit.
DENVER NUGGETS
Round 1: None
Round 2: None
Grade: C+. Traded this year's first rounder for Ty Lawson, a deal that has worked out very well for the Nuggs.
DETROIT PISTONS
Round 1: Greg Monroe (7)
Round 2: Terrico White (36)
Grade: C+. The Pistons needed a bruiser inside. Monroe plays like another guard. Is he talented? Yes, but he doesn't fit their needs.
SACRAMENTO KINGS
Round 1: DeMarcus Cousins (5)
Round 2: Hassan Whiteside (33)
Grade: C. On talent alone, the Kings get an A+. However, both of these guys have character issues. Add them to a team whose best player just got arrested for driving 140mph and it seems like a recipe for disaster.
INDIANA PACERS
Round 1: Paul George (10)
Round 2: Lance Stephenson (40), Magnum Rolle (51)
Grade: C-. George plays the same position as the Pacers' best player. Is another deal in the works? If not, how does he fit? Hate the rumors surrounding Stephenson too. Hate them.
GOLDEN STATE WARRIORS
Round 1: Ekpe Udoh (6)
Round 2: None
Grade: D+. Not only is Udoh injured, but if they planned to trade for David Lee, why would they take another PF?
NEW YORK KNICKS
Round 1: None
Round 2: Andy Rautins (38), Landry Fields (39)
Grade: D. Blah.
PHOENIX SUNS
Round 1: None
Round 2: Gani Lawal (46), Dwayne Collins (60)
Grade: D. Blah.
MIAMI HEAT
Round 1: None
Round 2: Dexter Pittman (32), Jarvis Varnado (41), Da'Sean Butler (42)
Grade: D. Pittman might hit 400 lbs. before he sees significant minutes in the NBA, Varnado has already signed in Europe, and Butler is recovering from a gruesome knee injury. Could have done more.
MINNESOTA TIMBERWOLVES
Round 1: Wesley Johnson (4), Lazar Hayward (30)
Round 2: Nemanja Bjelica (35), Paulo Prestes (45)
Grade: D-. Last year it was the point guards, this year it was the small forwards. Again, why no diversification? Johnson can be an above average 3, but the other picks seem wasted.
ORLANDO MAGIC
Round 1: Daniel Orton (29)
Round 2: Stanley Robinson (59)
Grade: D-. Put simply, I don't believe in Daniel Orton. He did nothing in college. What did he do to deserve a first round grade? I really think Thunder GM Sam Presti put out false information that his team was interested in Orton to brew interest from other teams. Great move by Presti, terrible move by Orlando.
CLEVELAND CAVALIERS
Round 1: None
Round 2: None
Grade: F. This team desperately needed something positive out of this draft and got nothing.
MEMPHIS GRIZZLIES
Round 1: Xavier Henry (12), Greivis Vasquez (28)
Round 2: None
Grade: Inc. The Grizzlies still haven't signed Henry despite the fact their is a "hard" slotting system for all rookie salaries. Makes no sense to quibble over a few thousand dollars. Pay the man now so he's motivated when he takes the floor.
CHARLOTTE BOBCATS
Round 1: None
Round 2: None
Grade: N/A.
Posted by MSpiciarich at 11:17 PM No comments: