Work has been incredibly busy over the last few weeks and clearly this blog has suffered. I'm not sure if I can hit all of these topics, but here are some questions I hope to answer in some upcoming posts:

-Is this legal with the new playoff OT rules in the NFL: the team receiving the opening kick drives down the field and converts a field goal. On the ensuing kickoff, can that team kick the ball out of their own end zone for a safety and end the game?

-How does Gregg Williams have a job?

-Why are left-handed starting pitchers so revered?

-John Lannan is in line for a $5m / season contract. Where did I go wrong? (Answering the previous question might help here.)

-If Sandy Alderson knew he wasn't going to re-sign Jose Reyes, why didn't he trade him when he had value before the deadline in July?

-Can Andrew Luck possibly live up to this hype?

-Are the Tigers really that good? Last I checked, Delmon Young is still penciled into the 5-spot of the lineup.

-Can we start calling Ponzi schemes by a new name: Boras schemes?

-Did you know my three favorite prospects in the 2012 NFL Draft are Trent Richardson, Justin Blackmon, and Brandon Boykin?

-Could James Dolan be any dumber? I love the fact that Time Warner is refusing to broadcast MSG. The only thing worth watching is the Knicks, and they are terrible right now. JD loses more leverage with every loss.

-How do you pass the time when your fantasy basketball team has been eliminated less than a month into the season?

-How long until a young American baseball player moves to the Dominican Republic, gains citizenship there, and signs for a lot more money than he would have gotten in the draft?

-Does T Rowe Price know the answers to the ridiculous questions they ask during their commercials? Does Southwest realize how stupid their flag-throwing baggage fee refs are? Can Pepsi Max never make another commercial?

-Does anyone know who Bruce Ellington is?

-How could I get fooled by Patrick Witt?

-Is Syracuse really going to fall apart without Fab Melo, a player that was laughably terrible last year when I saw him play live at the Garden? Remember this when filling out your brackets in March.

-More of a request than a question: Peyton, can you please not be Brett Favre II. If it's time to go, just ride off into the sunset.

-I don't care how bad AJ Burnett is. If the Yankees are willing to eat 90+% of his contract, why won't anyone take him? A team like the Padres or Mariners with huge ballparks couldn't use this guy?

Sometimes, Being a Sports Fan Sucks

And this is absolutely one of those times.

I'm 28 years old. In my conscious sports fandom - basically since I was five years old - none of my favorite teams in any of the major sports has won their respective title. I have never been able to enjoy a championship, and it sucks.

Jets: Have not reached the Super Bowl in my lifetime. Lost in the AFC title game in each of the previous two seasons. Internal quarrels threaten to crumble the current team. Franchise quarterback turns out to be a fraud. Outlook: Dim for the next couple years.

Knicks: Lost 1994 and 1999 NBA Finals. Haven't won a playoff series since 2001.  I purchased season tickets last year in the hopes they could sign LeBron. They didn't but made playoffs anyway.  After being eliminated in the first round and throwing way too much money at Tyson Chandler, the Knicks decided to increase prices by 50% for this season.  I declined to renew. Outlook: Dim for the next couple years.

Islanders: Perennial doormat of the Eastern Conference. Haven't won a playoff series since 1993. Outlook: Dim for the next four years...at least.

Not only do my teams perform poorly, but the teams I despise have been INCREDIBLE over this same timeframe.

The Yankees have won five World Series titles. The Giants have won two Super Bowls and might win a third this season, and the Patriots won three as well. Even the Rangers broke a 54-year Stanly Cup drought in 1994. 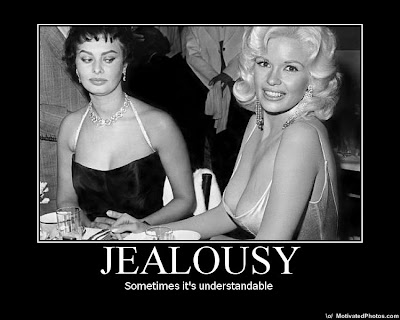 Am I jealous? Absolutely.

Things are just not looking bright for me. However, I'm going to spin this into a positive.

We all know when things are going badly, they usually go very badly. Based on the rankings of "how awful the Super Bowl would be if this ended up being the matchup" I will be able to determine who will win this weekend.

Acceptable:  Ravens-49ers - The Harbaugh brother talk would get repetitive and boring but it will be easy to change the channel and/or simply tune it out. Chances of this matchup occurring: 10%.

Bad: Ravens-Giants / Patriots-49ers - In either of these scenarios, one of my despised teams would likely be favored.  Chances of one of these matchup occurring: 50%.

Downright Awful: Patriots-Giants - A rematch of the 2008 Super Bowl would pit my least favorite teams in the sport against each other in a no-win game for me. Chances of this matchup occurring: 40%.

Gimme the Pats and the Giants this weekend.  Fate wouldn't have it any other way.

-Best thing that could have happened to the New Orleans Saints this offseason occurred this week: Gregg Williams took another job.  I have no idea why this guy is a desired coaching commodity. If someone could explain it, I would appreciate it.

-Apparently, the Jaguars didn't watch the Falcons stink up the joint offensively in their playoff game two weeks ago in New York because they decided to hire Atlanta's offensive coordinator Mike Mularkey to be their next head coach. Expect a lot of QB sneaks in Jacksonville over the next two years...at which point MM will either be fired or this team will be in LA.

Posted by MSpiciarich at 5:58 PM No comments:

I like to get at least one mock draft before the ESPN and CBS guys do theirs. Here are picks 1 through 20 with a few comments mixed in.

2. St. Louis Rams: Trent Richardson, RB, Alabama - They need playmakers, and I am going on record as saying TR will be this draft's best player.

3. Minnesota Vikings: Matt Kalil, OL, USC - This seems like the most obvious spot for a trade as Washington, Miami, and others will need to jump ahead of Cleveland to have a shot at RGIII. 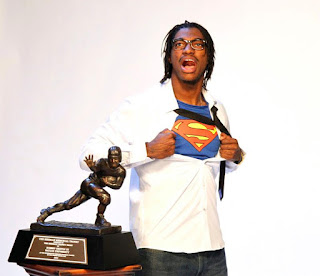 7. Jacksonville Jaguars: Alson Jeffery, WR, South Carolina - Last year, I begged Jacksonville to trade up for either AJ Green or Julio Jones. Did they listen? Of course not. Did they suck this year with one of the most pathetic receiving corps the NFL has ever seen? Of course.

*9. Carolina Panthers: Michael Floyd, WR, Notre Dame - Floyd and college teammate Jimmy Claussen form one of the best QB-WR duos in the NFL...or something like that.

15. Philadelphia Eagles: Luke Kuechly, LB, Boston College - Might not look the part but one of the most productive seasons in college football history. 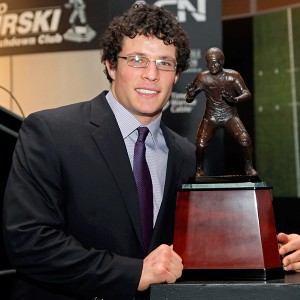 Mark Sanchez sucks and needs to be replaced.

Wayne Hunter sucks and needs to be replaced.

Kyle Wilson sucks and needs to be replaced.

Santonio Holmes and Plax suck and need to be replaced.

I was way too optimistic about this team. Too frustrated to post a full blog here, but it is going to be a long offseason.
Posted by MSpiciarich at 5:41 PM No comments: