It's been way too long since I last posted, and few things in the sports world get me more excited than the NFL Draft. I like getting my first mock out before the Combine to set a marker in the water.

1. Cleveland: DE Myles Garrett, Texas A&M - Not even the Browns can screw this one up. Although by drafting him, they'll probably screw him up somehow.

2. San Francisco: DT Jonathan Allen, Alabama - I'm not a believer in this year's QB class, but then again, I wasn't a believer last year and QBs went first and second overall. Plug Allen in for the next decade and call it a day.

4. Jacksonville: RB Leonard Fournette, LSU - I was on Zeke last year as a surprise top 10 pick before almost anyone else. Fournette is this year's Zeke so I'm expecting him off the board at the same #4 selection.

5. Tennessee (via LA): DE Solomon Thomas, Stanford - Haven't seen anyone else with Thomas this high, but every time I watched him, he dominated. Also making a blind faith assumption that he'll interview well and impress teams with his Stanford intelligence.

6. New York Jets: CB Marshon Lattimore, Ohio State - The Jets could go in so many different directions here, but fresh off the Revis release, I'll give them Lattimore. 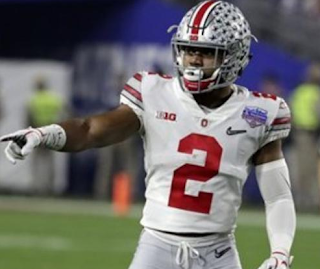 Newest graduate from THE Cornerback University

8. Carolina: OT Garrett Bolles, Utah - This is a weak year for top-tier offensive linemen but the Panthers need to protect Cam. 14 years ago, Carolina took OT Jordan Gross from Utah with the 8th overall selection and that worked out pretty well (Gross still works as a sideline reporter for the team). Repeat performance here?

9. Cincinnati: DE Derek Barnett, Tennessee - Pure speculation here, but I'm guessing the Bengals spend less on college scouting than any other team in football. They are probably too cheap to even drop the $79.99 to purchase ESPN Goal Line. They watch CBS, Fox, ABC, and ESPN. Don't even think they can afford ESPN2. If you don't play on those channels, you are out of luck in Cincy. Then they take the best players from those teams. Really simple strategy. Hey did you see Barnett dominating the SEC? Sure did. Let's take him.

12. Cleveland (via Philadelphia): QB Mitch Trubisky, North Carolina - Seems like a dream scenario for Cleveland. After landing the best player at #1, they would have their pick of QBs to ruin.

13. Arizona: WR Corey Davis, Western Michigan - Tough to think of a better situation for a young WR than to learn from Larry Fitz. Just ask Michael Floyd. Too soon?

17. Washington: LB Reuben Foster, Alabama - Anyone else sick of Bama or is just me? Love that Clemson dominated them in the national title game. I digress.

18. Tennessee: WR Mike Williams, Clemson - Similar to the Browns' dream scenario, I think the Titans brass would do back flips if they could snag Williams here. I'm guessing he's in consideration for them at #5.

20. Denver: OT Ryan Ramczyk, Wisconsin - I have a soft spot for any former D-III athletes. Make us proud, kid.

23. New York Giants: TE OJ Howard, Alabama - It has now been a full decade since Jeremy Shockey left New York. (Wow, that makes me feel old.) That was the last time Eli had a legitimate threat at the tight end position.

24. Oakland: DT Caleb Brantley, Florida - The Gators might have four first round picks from their defense (and possibly up to seven defenders drafted in total). How did they give up any points this year?

26. Seattle: OG Forrest Lamp, Western Kentucky - I love Lamp. Not really, but Russell Wilson will take any protection he can get.

28. Dallas: OLB Tak Mckinley, UCLA - I love watching this guy's tape. Freak athlete with sprinter speed who runs all over the field to make plays.

31. Atlanta: TE David Njoku, Miami - If you thought the Falcon offense was good last year, wait until they add a threat at another position.

32. New England: QB Pat Mahomes, Texas Tech - Just a hunch but I think Jimmy G will get traded this offseason for a couple second round picks allowing Mahomes to become the heir to the Brady throne. (Speaking of feeling old, I remember when Mahomes' dad was on the Mets. Jesus.)

-The Jets will end up with another second round QB. Wouldn't mind if that pick was DeShone Kizer.

-How about Ole Miss QB Chad Kelly to the Bills in Round 3? Uncle Jim can watch after him in Buffalo and keep him on the right track.


Posted by MSpiciarich at 11:10 AM No comments: