Although I admit quantifying and grading football plays sabermetric-style is in its embryonic stages, the group at ProFootballFocus.com seems to have done a pretty good job.

For a few minutes, let's just assume that their numbers are in fact accurate.

Five things I noticed (offense only):

*Matt Forte is the worst running back in football.

*Of all safeties playing at least 60% of their team's snaps, the recently benched Kerry Rhodes (NYJ) has actually been the fifth best safety in the league. Perhaps, Rex Ryan's anger is misguided.

*Kevin Boss (NYG) is the best tight end in football by a wiiiide margin. In fact, he is almost 50% better than the next closest tight end. Shockey who?

*OT Nick Kaczur (NE) has played in 750 snaps without being called for a single penalty.

*Bears fans shouldn't blame all their team's struggles on Jay Cutler (and/or Matt Forte). Instead, they should look to their offensive tackles, Orlando Pace and Chris Williams, who rank as the league's two worst at the position.

I really can't get enough of this site. i don't think I can glean any sort of fantasy-related information, but I will continue to try.
Posted by MSpiciarich at 9:16 AM No comments:

Happy Thanksgiving to all and happy birthday to my sister.

Another huge weekend. I was actually riding an 11-gmae winning streak dating back to last week. That, of course, was ruined by the Bucs, proving once again why you should never bet against the Saints.

I wanted to lock in some winnings and not waste a great start so I decided to hedge. At this point, my EV was:

If I put 475 on the Giants (Falcons' opponent) on Sunday, then my four outcomes were:

If the Giants lost, I would then hedge the Titans-Texans game. Only one problem... no one would take my Giants bet meaning I had to sweat this game out.

And sweat it out, I did.

The Falcons were down two touchdowns with less than 10 minutes to play. Miraculously, a Tony Gonzalez catch (and suing celebration that could be heard throughout Manhattan) sent the game into OT, guaranteeing the cover.

So, heading into last night's game, there were two outcomes:

I'm a risk-taker by nature but not insane.

The Titans ended up winning outright so I hit 8-for-8 meaning the end result was a +1120 unit weekend.

Enough excitement to last a whole year... or at least until next weekend. 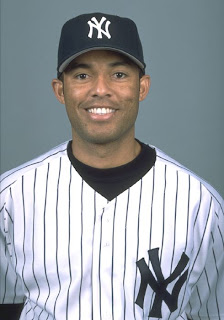 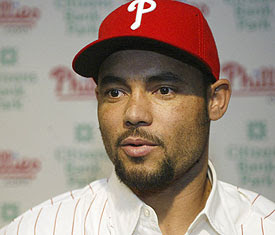 Check out this post on MLB Trade Rumors.com which will link you back to a Sports Banter article from earlier this week. And round and round we go.
Posted by MSpiciarich at 1:36 PM No comments:

My second DraftAce blog has been posted here.
Posted by MSpiciarich at 12:51 PM No comments:

This year's free agent class pales in comparison to that of last offseason. For one thing, of the "premier" players on the market, only one is under 30 years old (Rich Harden), and he hasn't thrown more than 150 innings in a season since 2004.

There are absolutely no sure things as question marks surround each free agent. Let's look:

1. Matt Holliday, OF: Are his numbers a product of Coors and batting behind Albert Pujols?

2. John Lackey, SP: Are injuries a thing of the past? (The best line I have heard on this subject declared "Past injuries are the best indicator of future injuries.") Not a good thing for the team signing J-Lack.

3. Jason Bay, OF: Is he just a glorified DH? Sabermatricians would argue so as his defensive numbers are pitiful.

4. Harden: He drools upside, but can he be counted on?

5. Adrian Beltre, 3B: After an incredible run in LA, his play has tailed off. Which player are you getting?

7. Jose Valverde, RP: Is signing a closer worth a top draft pick?

Ben Sheets: He sat out the entire 2009 season but has as much talent as anyone in this class.

Xavier Nady: Another guy who missed most of 2009. This dude has serious pop.

Mike Cameron: The perennially underrated Cameron is a defensive wizard.

Carlos Delgado: Can he bounce back from another injury?


Others Sure to be Overpaid

Johnny Damon: Being a good "glue" guy only gets you so far. Just ask Kevin Millar. (Admittedly, Damon is in another class from Millar but he is not that good.

Marco Scutaro: Guy has career year before he is eligible for free agency? Wow, haven't heard that before.

Hideki Matsui: A great postseason proved he can still hit (especially righties) but where does he fit in the field?

Fernando Rodney: Sure, he's wild, but he's an effective wild which still works.
Posted by MSpiciarich at 7:26 AM No comments:

Tattoos, monocles, bears and other thoughts and observations

*Loyal readers know that I am a huge fan of neck ink. If I didn't have to work for a living, I would even consider donning some myself. However, while watching the Nuggets-Lakers game the other night, I encountered a neck first:

JR Smith has overlapping neck ink. The palette, which doubles as his Adam's Apple, has a New York Yankees' logo and what looks like some script writing that begins somewhere under his ear and ends directly in the middle of his throat.

You really have to love tattoos to overlap them. . . or you just have to get drunk enough not to care.

*Wouldn't new Hornets coach Jeff Bower be much cooler if he wore a monocle? If anyone can pull it off, I think it's him. 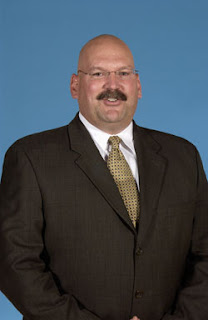 *I could use some upsets if my Georgia Tech-BCS Champ prediction is going to come to fruition.

*Who came up with this terrible idea?

*Reason #12 that bears don't make good pets: they can eat you anytime they want.

*Is it just me or do this year's top incoming freshman have great names, almost video game-like:

For what it's worth, my favorite name on an actual person that belongs in a video game: David Freese (St. Louis Cardinals 3B prospect)

*Jamal Lewis, in reference to Jim Brown, was recently quoted as saying, "I always wanted to follow in his footsteps."

Memo to Jamal: When discussing Jim Brown, please make sure to qualify all statements in a manner that makes it perfectly clear you are only talking about his play on the field and not his off-the-field exploits. Brown's post-playing career is bordering on OJ-esque as he has been accused of spousal abuse at least four times.

*I really hope U2 finds whatever it is they are "looking for." And, soon.

*Living in the big city, I don't get to do much driving. Last week, however, I was at my parents' house on Long Island and saw a great bumper sticker: "My pooch is smarter then your honor student." My first thought: Maybe, your pooch can teach you the difference between "then" and "than."

Posted by MSpiciarich at 6:22 AM No comments:

I recently got a new gig as a blogger on DraftAce.com, a site dedicated to the NFL (specifically the Draft). I will be covering the AFC East.

My first post went up tonight and can be found here. Bookmark it.
Posted by MSpiciarich at 10:23 PM No comments:

The stigma of being a Type A free agent negatively affects numerous players each offseason (Juan Cruz and Orlando Hudson come to mind from '08). In the next CBA, might it make sense for the players to renegotiate the terms of Type A and Type B free agents?

In the current economic environment, teams are wary of losing a top pick.

My proposal: Give the team losing the free agent two supplemental first round picks regardless of which team signs this player, and do not take away a first rounder (best 15 records) or second rounder (worst 15 records).

Benefits: Teams can be aggressive in their pursuit of free agents thus making the players happy; teams losing free agents could get better picks under these rules (in the scenario where a team with one of the worst 15 records signs a player, the team losing the free agent would get two supplementals as opposed to a supplemental and a second rounder)

Disadvantages: The best teams could get better without much consequence; teams could get worse picks (in the scenario where a team with one of the best 15 records signs a player, the team losing the free agent would get two supplementals as opposed to a first rounder and a supplemental).

What are your thoughts?
Posted by MSpiciarich at 6:26 AM 1 comment:

The money is essentially a wash and both guys can desperately use a change of scenery. Additionally, both have shown they are at least capable of putting up big numbers (Bradley: 2008; Perez: 2004). This seems like a no-brainer from both sides.

Call me crazy, but how far are the Royals away from competing? Not as far as you may thing despite the fact their GM would fail even the most remedial talent assessment class. Any pitching staff with Zach Greinke at the top will have promise, and Gil Meche, Luke Hochevar, and Robinson Tejada flashed enough potential to make this team interesting. If they can sign a bat or three in free agency (and make this deal), the Royals can compete in 2010 without sacrificing any future talent.

The Tigers rid themselves of huge short-term liabilities in exchange for taking on about $20m of salary over five years. This could make sense if the Tigers think the economy will rebound in the next three to four years and could buy them time, thus preventing them from having to hold a firesale (read: Curtis Granderson and Edwin Jackson). The Cubs buy some really expensive lotto tickets in Willis (a former Cub prospect) and Bonderman.
Posted by MSpiciarich at 7:38 AM No comments: