For those new to my mocks, welcome. It’s good to have you onboard. For those returning readers, thanks for coming back.

1. Cleveland Browns: Sam Darnold, QB, USC – The Cleveland Browns must take a quarterback with this pick. Have some conviction in a player already, and stop being the Jets and waiting until the later rounds to try finding an inevitably terrible signal caller. For the love of peace. Please do this. Now, whomever it is they actually choose will suck, but you gotta take a chance here in a QB-heavy draft. I'm not buying the Troy Aikman comps for Darnold. Personally, I think he looks like actor Sean Astin. More like the Rudy Astin than the Stranger Things Astin at least but still I think I’m on to something. Be wary, Cleveland.

2. New York Giants: Josh Rosen, QB, UCLA – On the complete flip side of the Browns (and to a lesser extent the Jets), the Giants franchise has had incredible stability at the QB position. Eli Manning has been the starter for the last 13 seasons and despite his mouth-breathing ways has led the team to two Super Bowl titles. It’s time for him to ride into the sunset and for the Gmen to find the next face of the franchise. Rosen goes from Big City to Biggest City and will probably thrive under new coach Pat Shurmur.

3. Indianapolis Colts: Saquon Barkley, RB, Penn State – Maybe not an obvious fit but after years of hearing the cliché that you should never spend a high pick on a running back, Zeke Elliott and Leonard Fournette changed the way of thinking. Getting Barkley and a healthy Andrew Luck back could make this team an immediate playoff contender in a relatively weak AFC. Indy has the third most money to spend in free agency which is an especially good thing since Ryan Grigson left town. I think this pick shakes up the franchise in a very positive way. They could also trade back a couple spots to a QB-needy team and add some draft capital, but getting Barkley would be my priority.

(TRADE) 4. Buffalo Bills (via Texans via Browns): Josh Allen, QB, Wyoming – Does trading down for the Bills' two first rounders and their second rounder make sense? It's basically a perfect match on the "draft value" chart, and I think that's a win for both sides. It allows Buffalo to get a top-tier QB, and it gives Cleveland the thing it covets most: more high draft picks. Now, the pick…If you are going to be successful as a quarterback in Buffalo, you need arm strength above all else. Allen has that. Unfortunately, he’s also very inaccurate as a passer. On the plus side, he’s a great athlete. On the down side, he makes bad decisions. Where does this all shake out? Time will tell. For now, he’s a Megamillions ticket, and if the Bills believe in him, they should move up to grab him.

5. Denver Broncos: Minkah Fitzpatrick, S, Alabama – When you zig, John Elway zags or just flips over you on his way to the goal line. 2017 was a disaster and everyone is expecting the team to revamp the quarterback position. I think they pull a surprise, and sign Kirk Cousins as a free agent instead of drafting a QB which would allow them to use this pick on Fitzpatrick, a player that could reinforce an already strong secondary. Cutting Aqib Talib would save the team $11m so Fitzpatrick might be a need pick come draft night. 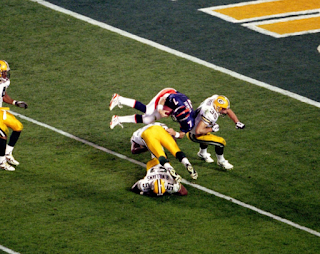 7. Tampa Bay Buccaneers: Bradley Chubb, DE, NC State – Watch film of the Wolfpack and this guy always jumps out. He’s a superstar in the making at a position of need. If he’s there at 7, the Bucs will sprint to the podium.

8. Chicago Bears: Calvin Ridley, WR, Alabama – I think most mocks will pair the former Bama superstar with second year QB Mitchell Trubisky, and it makes a whole lot of sense. If you want Mitch to make any kind of leap in his sophomore campaign, he needs a number one wideout.

9. San Francisco 49ers: Denzel Ward, CB, Ohio State – The ‘9ers need secondary help and John Lynch should be able to identify that type of talent. For my money, Ward is the most talented DB in the class, but Minkah Fitzpatrick’s versatility will push him higher on the board.

12. Cincinnati Bengals: Arden Key, DE, LSU – I’ll take “Talented Players from Big Programs with Off-the-Field Issues” for $400, Alex. Could there be a more perfect Bengals pick? I don’t have an explanation as to why he missed all of spring practice last year, but the Bengals should find out … and then take him anyway because he’s the most talented player on the board.

15. Arizona Cardinals: Mike McGlinchey, OL, Notre Dame – I’m not sold on any quarterbacks here so the Cards take the best offensive lineman on the board. It hasn’t generated much chatter, but Case Keenum to the desert makes a lot of sense to me.

16. Baltimore Ravens: Christian Kirk, WR, Texas A&M – The Breshad Perriman experiment didn’t work out. Since the Ravens are all but stuck with Joe Flacco, Kirk gives him a weapon out wide, and he doubles as a dynamic kick returner.

18. Seattle Seahawks: Derwin James, S, Florida State – James probably would have been a top 10 pick if he came out after his freshman year but a slow recovery following a torn meniscus injury causes him to slide to Seattle which would be an ideal spot for him, the newest member of the Legion of Boom.

19. Dallas Cowboys: Marcus Davenport, DE, UTSA – The hottest name on draft boards right now is a Roadrunner from UTSA. He could go 10-15 picks higher or 10-15 picks lower and I wouldn’t be shocked. For now, he stays local and becomes a Cowboy.

20. Detroit Lions: Derrius Guice, RB, LSU – The Lions have not had a player rush for 100 yards in a game since 2013. That’s unfathomable. Guice did it a dozen times at LSU (three of those games he eclipsed 250 rushing yards). He’s the playmaker Detroit needs to balance out the offensive attack.

(TRADE) 22. Cleveland Browns (via Chiefs via Bills): Josh Jackson, CB, Iowa – Harrison and Jackson revamp the secondary. Now, Cleveland can spend the rest of the draft on the offensive side of the ball and start to

23. Los Angeles Rams: Orlando Brown, OT, Oklahoma – Zeus 2.0. Brown is the son of the former NFL behemoth with the same name. This Brown is 6 foot, 8 inches of girth and will protect Jared Goff’s blindside for a decade.

24. Carolina Panthers: Da’Ron Payne, DL, Alabama – Payne might have made himself more money than any other player during this year’s college playoffs.

30. Minnesota Vikings: Lamar Jackson, QB, Louisville – Wait, what? The Vikings have too many quarterbacks as is, right? Wrong. Case Keenum has one foot out the door. Sam Bradford is always one step away from IR, and Teddy Bridgewater has looked underwhelming. Enter another Louisville product, Lamar Jackson. He could be the QB of the future or he could play wide receiver or he could replace Jerrick McKinnon. He gives the team optionality.

31. Philadelphia Eagles: Lorenzo Carter, LB, Georgia – The Eagles have 20 of 22 starters signed for next year. One of the two unsigned is LB Nigel Bradham. Carter can be a low cost alternative and jump right into the starting lineup.

32. New England Patriots: Sam Hubbard, DE, Ohio State – Another personal favorite. I would hate seeing him face the Jets twice a year for the next decade.
Posted by MSpiciarich at 7:45 AM No comments: