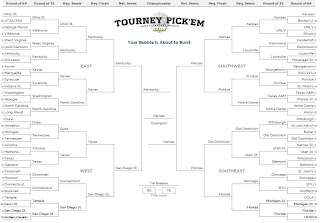 I haven't seen much love on the web for Kentucky or San Diego State so I'm hoping those two selections will distinguish my bracket from the rest. I'm a big believer in the Wildcats and thought they got shafted with a 4-seed despite crushing Florida (another one of my Final Four teams) in the SEC title game.

I played home court advantage along with my newly developed formula which accounted for offensive and defensive points scored / allowed per possession, turnovers, and rebounding. It also factored in star power and the three leading scorers per team. Looking back, I wouldn't be devastated if it doesn't work because it was a little complex.

Teams that were egregiously underrated, per my formula: Utah State, Cincinnati, Old Dominion, Texas A&M, Villanova, Gonzaga
We'll see in a few weeks - likely sooner - how wise this formula was.
Posted by MSpiciarich at 12:25 PM